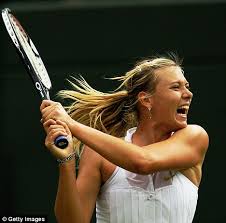 There are plenty of similarities that can be drawn between swinging a tennis racket and swinging a drumstick.
1. Tennis racket hits a ball, drumstick hits a drumhead
2. Wrist strength and coordination are important
3. Both can suffer from injuries and inflammation (‘tennis elbow’ and carpal tunnel syndrome of the wrist) from over-training, poor technique or poor equipment.
4. The path through the air that the stick or racket take is important.

1. Racket meet ball; stick meet drumhead. When a tennis player swings his or her racket through the air to contact the ball, there are several things at play. First, the tennis ball should contact the racket strings in the tennis racket’s ‘sweet spot’. This is an area near the center of the racket where the strings have the most ‘give’ or the highest degree of ‘deflection’ when the ball hits it. Hitting the ball in this area of the racket strings will usually transmit the least amount of shock into the player’s arm. There is also a ‘slingshot’ type of effect that occurs, since when the ball hits the strings in this area, the strings are pushed backward slightly to absorb some of the ball’s impact force, but, like a rubber band, this energy is stored until the ball leaves the racket where it is released again. Just think of putting a tennis ball into a slingshot, pulling it back and letting it go… except that you would add the actual swing of the racket to this. Kind of like swinging a slingshot. I think that just using a tennis racket is much easier for the purpose of playing tennis however 😉 Similarly, a drumhead has a sort of ‘sweet spot’ where the head deflects the furthest… BUT…. many players consider this to be the least pleasing place to hit the drumhead. A tennis racket’s sweet spot is where the strings deflect the furthest, a drumhead’s sweet spot is where ‘people’ think it sounds best. Of course this is purely objective, but the center of a drumhead is a vibrational ‘node’ (similar to a node on a vibrating string). To keep the discussion on the shorter side, many players prefer not to hit the center of the drumhead, in favor of halfway between the center and the edge.
2. Wrist strength and coordination. A drummer and a tennis player alike must both develop control over their
– fingers (to grip the stick or racket securely but not too tight, and for drummers to control some of the bounce)
– wrists (to control the angle that the racket meets the ball or the stick meets the head)
– elbow/forearm (more so for tennis, but could be important for drumming styles where the whole body is involved)
– shoulders (for drummers this might be in the sense of avoiding any awkward tension, but for tennis players a considerable factor to generating a powerful stroke)
– upper body (mostly for tennis players unless your drumming style uses larger body parts, such as taiko-style drumming).

3. Injuries. These are never good, and take some time to repair an calm down if they are bad enough. On one end of the spectrum you may have a muscle injury, which may be minor that will heal with some rest, or major that will require therapy or a doctor’s visit. On the other end there are joint-related inflammation problems referred to sometimes as ‘repetitive stress’ injuries. The simple way to approach joint problems is to try lighter sticks, a lighter racket (or if you are using a metal racket, look into a composite one with a built-in or add-on vibration dampener), or just to cut back on the practice time. If it hurts a little, take a break and be more gentle. If it really really hurts, see a doctor and re-evaluate your practicing technique.
4. The path of the stick or racket. The path of the tennis racket can affect how hard you hit the ball, what kind of spin you impart on it, and how efficient it is for your body’s physics. The path of a drumstick will effect how loud your sound is, how efficient it is for your body’s physics, and if your two sticks are following different paths, your sound may be different as well. Creativity aside, efficiency is all about using your body in ways so that it lasts a long time, stays healthy and wastes the least amount of energy. A simple way to observe these paths is to practice in a mirror (you can see things as you are doing them), or with a video camera (probably better for a tennis player since watching the ball and watching yourself in a mirror or television monitor may not be ideal). When I drum in front of a mirror on a practice pad (standing up usually with the pad on a tall snare drum stand), I try to keep the bead/tip of the stick moving in a completely vertical path. Sometimes my left stick has a tendency for the stick’s up and down movement to be at a slight angle, maybe about 30 degrees away from vertical. When I try to correct this I first check to make sure my hands are rotated at the same angle, palms not perfectly parallel to the floor, but at least at a 45 degree angle to the floor. Second I make sure I’m holding the stick the same way, fingers in the same place relative to the stick’s stamped-on logo, same gap or lack of gap between thumb and side of hand. Third, I think about the way my wrists are moving during the stroke, the muscles may not be developed the same with each hand, so making them exactly identical may feel awkward at first; it’s something to work on though.