Well, it would have been my alma-mater if I had actually graduated from there… I did march snare drum in that band for one year though ;D

Here is a repost of the article on NorthTexas.unt.edu: 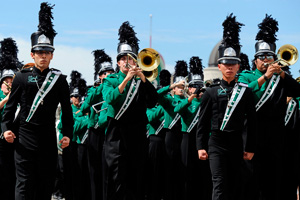 UNT’s Green Brigade Marching Band was named No. 1 in the land by Bleacher Report, a national sports website that compiles a list of the nation’s 25 best college marching bands. The 320-member Green Brigade, which has long been a Mean Green nation favorite, performs at many athletic events and marching competitions throughout the year and releases a CD of season highlights every two years.Director Nicholas E. Williams (’97, ’04 M.M., ’09 D.M.A.) says this recognition “shines a light” on the work of the band members and what they do for the university and the College of Music.

“I’m extremely excited to see this recognition,” Williams says. “The band kids work at a consistently high level year round. As the students have said to me about this honor, ‘This is cool.’”

Watch a performance by the Green Brigade online or enjoy the band live at home football games this fall. And don’t miss the Green Brigade’s “Sounds of the Stadium” concert, which will include Denton ISD marching bands, at 7 p.m. Oct. 25 in the UNT Coliseum. Admission is $10 at the door. The band’s spring 2010 CD is available in the UNT Bookstore and the wind studies office.

The College of Music enrolls the largest number of music majors of any university in the country. More than 1,600 music majors from all over the world pursue specializations including classical music performance, jazz studies, music education, composition, musicology, theory and ethnomusicology.